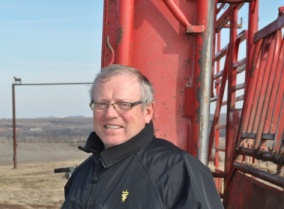 Douglas R Frels DVM
A Hershey, Nebraska native, Dr. Doug Frels graduated from the University of Nebraska with a BS in Animal Science. He received his DVM degree with honors from The Ohio State University College of Veterinary Medicine in 1986. Dr. Frels is a mixed animal practitioner with emphasis in cow/calf production. He is married to his classmate Dr. Donna Paglialunga and they have 3 children, Katherine, William and Therese. He enjoys being involved with the family farm in western Nebraska and working with antique farm equipment. He keeps busy following his family's activities and being involved with the community. 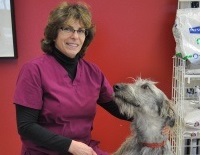 Donna M Paglialunga DVM
As our small animal veterinarian, Dr. Donna has been practicing in Guthrie Center since 1986. She was born in Canton, Ohio, graduated from Ohio University with a BS in zoology and received her DVM degree from The Ohio State College of Veterinary Medicine. She enjoys working with companion animals as small as pocket pets up to as large as her own Irish Wolfhound "Iris". She provides small animal medicine and soft tissue and orthopedic surgery. Her interests include the activities of their 3 children, running/swimming/biking, gardening and raising koi.

Katie Irlbeck DVM
Katie grew up on the family farm near Odebolt, Iowa, where her family grows corn, soybeans, oats and hay, and raises quarter horses. She graduated from Odebolt-Arthur High School and continued her education at Iowa State University, where she graduated with a Bachelor of Science degree in Animal Science. Katie was then accepted into Iowa State University's College of Veterinary Medicine, which was one of her childhood dreams. Throughout vet school, Katie kept active in various veterinary student clubs. She earned her Doctor of Veterinary Medicine degree in May 2012.
With her diverse background, Katie sees cow/calf, horses and small animals.
In her spare time, Katie enjoys working with and riding her horses, which is something she has been involved with since childhood. Katie recently married David Irlbeck. They currently reside on his family farm between Coon Rapids and Guthrie Center.

Stacy Huss
Stacy is our Registered Veterinary Technician. She graduated from Kirkwood Community College in May 2005 with an Associates Degree in Veterinary Technology. She started working at Guthrie County Veterinary Services in December 2005. She lives south of Adair with her husband Travis and 2 daughters Jerzee and Brystol. They have an English Mastiff named Zoey and 2 cats, Herky and Cy. When not working, she loves spending time with her family and friends.

Catherine Moses
Catie is our Head Receptionist. Catie was born in San Diego, California and raised in Norfolk, Nebraska. Her family moved to Guthrie Center in 2003. After graduating from Guthrie Center High School in 2007 she attended South West Community College in Creston, Iowa studying accounting. Catie moved to Texas where she worked as a treatment coordinator at Monarch Dental. Catie has an older sister teaching at Guthrie Center Elementary School , a younger brother in active duty in the United States Army and another brother working in Guthrie Center.

William Frels
William Frels assists with large animal cases and chute processing work during the summer and time away from college classes. He graduated with honors from Guthrie Center High School and is currently attending Iowa State University majoring in Animal Science, where he is on the Dean's List. At ISU he is in Block and Bridle and is secretary of the Tractor Club. He is an Eagle Scout. William was past president of Guthrie Center FFA chapter, showed livestock in 4-H for 9 years, was active in band, chorus, and cross country/track. His hobbies are restoring old trucks, tractors, and windmills. He has a small herd of angus/Simmental cows and is involved with his grandparents' farm and ranch at Hershey, Nebraska.